Icy Roads In Ontario and the Law 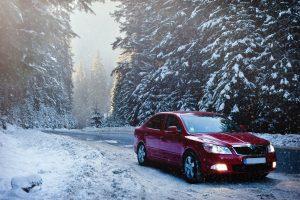 Ontario has seen some incredibly dangerous weather this winter.  Temperatures have fluctuated wildly above and below the freezing mark leading to freezing rain, icy roads, and very dangerous road conditions.  This has lead to many Ontarians finding themselves sliding off the road, becoming involved in collisions, and being charged by the police.  What are some of the most common charges that you need to be aware of?  What are the consequences of a conviction for court penalties, licensing, and insurance?

What Are The Most Common Problems For Driving On Icy Roads?

Snowy or icy roads means reduced traction for vehicles.  Whether you are a mom or dad heading to work or bringing the kids to school, or whether you are a professional truck driver hauling a load of expensive (or even dangerous) commercial goods…hazardous road conditions can turn an ordinary day into a nightmare of property/vehicle damage, injuries, insurance or licensing problems, and legal problems.

Once a vehicle loses traction with the road, it become a projectile.  That can mean sliding into an intersection or off the road.  It can also mean running into a pedestrian or another vehicle. This can lead to being charged by the police and facing court penalties, licensing problems, and insurance increases.

The charges that can be issued by the police can range wildly from small, minor offences up to serious offences that could result in life-long consequences.  A conviction could result if a court fine of the thousands of dollars, a suspension of licence, imprisonment, a record of conviction, as well as either having your insurance increased or cancelled.  Commercial motor vehicle (CMV) drivers could also face loss of employment and difficulty in finding new employment.

Let’s take a look at some of the more common offences that could occur.

What if I Slide Through An Intersection?

This scenario is fairly common after freezing rain under icy road conditions:  you’re approaching a stop sign or red light, you apply the breaks, but the vehicle keeps sliding out of your control and into the intersection.  Hopefully not hitting anyone or anything.  This could lead to being charged with one of the following offences

These are incredibly dangerous situations that can quickly change an ordinary day into injuries and damages that result in lifelong consequences.  Worst case, they could lead to a fatality and enormous legal and financial liabilities.

These charges are some of the more simple, minor offences that could be issued in these circumstances.  The total fine that is owed to the court is comprised of the fine issued by the court plus a victim fine surcharge.  The standard court fines for these offences are as follows:

On top of the fine, a record of conviction would be registered against your driver’s licence with the following demerit point penalties:

Commercial motor vehicle drivers, such as those who drive transport trucks for a living, can also face CVOR point penalties as follows:

It is important to note that CVOR point penalties go as high as 5 CVOR points for the most serious offences that a CMV driver can be issued.  This can lead to some complex legal scenarios where an offence like Disobey Lane Light might carry 0 demerit points but also carry 5 CVOR points.  While such an offence would result in a record of conviction with no demerit points, it also carries the highest possible consequence for the CVOR and may result in termination of employment.  An experienced and licensed paralegal can help guide you through these issues to protect both your personal and professional interests.

What is Careless Driving?

Careless Driving, under Highway Traffic Act section 130, is an incredibly serious charge to be issued by the police.  There are two types of Careless Driving offences that can be issued:

Both sections would carry 6 demerit points upon conviction.  Commercial motor vehicle drivers could also face the maximum 5 CVOR point penalty.  Where the two versions of Careless Driving offences vary greatly is in their potential court penalties.

Careless Driving offences that involve death or bodily harm under HTA s.130(3) carry a much higher range of court penalties:

it is important to keep in mind that these base court fines are also subject to the victim fine surcharge:

Can Transport Trucks Use The Inside Lane on an Ontario Highway?

Transport truck drivers can face a lot of pressure to deliver their cargo on time.  Pressure from their employer and pressure from the customer waiting for their delivery.  Bad weather conditions can mean that highway traffic becomes slowed or even completely stopped.  It is tempting to see that the inside lane of the highway is open or moving quicker, and wanting to pull into that lane to make up time.  However, Ontario Regulation 608, schedule 3, section 1(1) states that:

“Prohibited Use of Left Lane on King’s Highway” is a surprisingly bad charge for commercial motor vehicle drivers.  While it carries no demerit points and a relatively minor $110.00 total-payable court fine, it also carries 5 CVOR points.  Quickly pulling into the inside lane on the highway to make up lost time on a delivery could result in job loss and difficulty in finding new employment in the industry.

What Should I Do if I Get Charged by the Police?

These charges are only a fraction of the possible offences that can be issued to an Ontario driver for mishaps during bad winter weather.  Each has its own court penalties, demerit points, CVOR points, and impact to your insurance.  Simply paying a fine is entering a guilty plea to your original offence and doing so without knowing the consequences of that conviction is a dangerous and blind gamble.  Unexpectedly losing your driver’s licence to a suspension could have an enormous impact to your personal, family, and work obligations.  Having your insurance policy cancelled and being forced onto high-risk insurance could result in years of extremely expensive insurance costs.  Truck drivers could unexpectedly be terminated from their employment over what appeared to be a minor infraction (did you know that speeding at 21 km/h or more has the same CVOR points as Careless Driving?).

It is important that you know what you’ve been charged with and to gather the necessary information that you will need to make informed decisions.  A legal misstep or a misunderstanding or the court process at the start of your defence can have serious legal repercussions resulting in an unnecessary conviction or a poorer outcome.  Put a licensed and experienced paralegal in the court room on your behalf to ensure you are making informed decisions and protecting your legal interests.  While the court process can seem overwhelming and intimidating, most cases can be resolved by your paralegal without requiring you to attend court or file any court documents.

If you've been charged with careless driving in Ontario you should contact us as soon as possible. We have skill and experience in helping drivers just like you respond to accusations of careless driving and provide free, confidential consultations to empower you to fight your charges. We help drivers throughout Ontario including Cambridge, Georgetown, London, Windsor and from our home office in Kitchener. Contact us online or call us directly at 1.844.647.6869 or text us a copy of your ticket to 226.240.2480.