Transport Truck Wheel Separations On The Rise In Ontario

It is a common sight for Ontario motorists:  chunks of black rubber and twisted wire littering the highway.  Transport truck tires that once travelled along the highway at speeds exceeding 100 km/h now laying as debris.  Torn apart and flung from transport truck wheel rims, becoming a road hazard or worse yet…hitting another vehicle potentially causing vehicle damage, injury, or loss of life.

Media reports have detailed years of injuries and fatalities occurring on Ontario roadways due to dislodged transport truck wheels which can weigh in at around 300kg (approximately 660 lbs) for the dual wheel set and brake drum.  Are these incidents actually on the rise?  Or is easier police reporting simply documenting these incidents more reliably?  Bruce Deachman wrote an interesting article for The Ottawa Sun recently exploring this topic and the potential court fines for drivers found guilty at court.

Wheel Separations on the Rise in Ontario

Friday’s fatal accident on Hwy. 417 near Carling Avenue was, according to the OPP, caused by a “dual wheel assembly set” that detached from a westbound transport trailer. The wheels jumped the concrete median and crashed into an eastbound van, killing the driver.

In 1997, 215 such cases were reported in Ontario, prompting the province to introduce legislation that increased fines, which now range from $2,000 to $50,000, and an absolute liability law, meaning that no defence can be offered if a wheel separation charge is laid.

Additionally, Ontario’s Highway Traffic Act requires that all commercial motor vehicles and trailers be inspected by the operator daily for load safety and mechanical fitness before being driven. 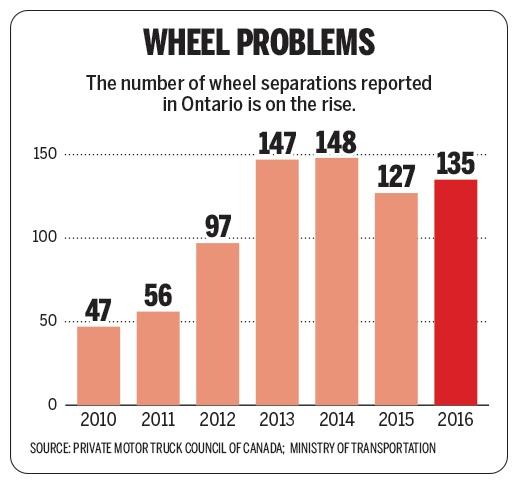 A dual wheel set with a brake drum can weigh in excess of 300 kg., and cause severe damages and injuries. In January 2016, a Burlington man was killed on Hwy 400 when a truck wheel hit the windshield of his SUV. Two months earlier, a woman was similarly killed on Hwy. 401 near London when a truck wheel struck her car’s windshield, while a Barmpton woman died in September 2015 when a wheel from a dump truck hit her windshield on Hwy. 401 near Mississauga.

In 2015, close to 113,000 vehicles were inspected by Ontario’s Ministry of Transportation. In December 2015, the Ministry also initiated a campaign specifically targeting truck wheels and their rims, hubs and fasteners. In just over three months, an additional 4,000 vehicles and 37,300 wheel assemblies were inspected, with 44 inspections revealing defects, and 23 trucks removed from the road.