Our Ontario roadways have certainly seen their fair share of strange stories when it comes to the behaviour of drivers.  Undoubtedly members of the OPP and various regional policing agencies start each shift unaware of what awaits them as they head out into their policing duties.  That certainly was the case for one Thunder Bay Police Service Traffic Unit officer recently…

Late in the afternoon on April 24, 2018 the officer noted a black pickup truck with licence plates that were not authorized to be used on that vehicle.  Upon conducting the traffic stop, the officer approached the driver and was surprised to find that where the driver’s proper, manufacturer’s designed and installed seat should be…there was a collapsible, blue lawn chair. 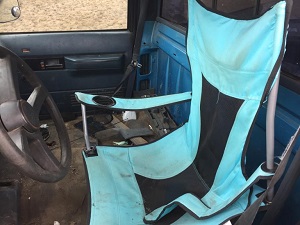 Amongst the various safety issues documented by the officer were a broken windshield obscuring the driver’s forward view, a defective door that effectively trapped the driver inside the vehicle, an insecure load in the box of the truck, and (not surprisingly…) no seatbelts present where they should be for the driver. 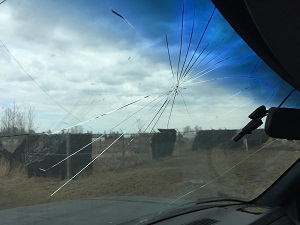 The young driver was also charged for driving on a suspended licence and for having no valid insurance for the vehicle.

Given the serious nature of the drive under suspension and no insurance charges, it is likely that all of the charges may have been issued by way of summons.  This potentially opens up the range of penalties that could be assigned by the court in the other offences.  For example, Use Plate Not Authorized for Vehicle falls under section 12(1)(d) of the Highway Traffic Act.  When this offence is issued by way of a standard ticket, it would come with a set fine of $140 ($170 in total-payable fine once the $25 victim fine surcharge and $5 court cost is added in).  However, once this offence is issued by way of summons, the following penalty section would apply:

This increases the potential fine up to a maximum of $1,000 ($1,250 total payable) and also brings up the possibility of imprisonment up to 30 days and potentially a suspension of up to six months.

“(8.3) Every person who contravenes or fails to comply with this section or a regulation made under this section is guilty of an offence and on conviction is liable to a fine of not less than $200 and not more than $1,000.”

The media release from the Thunder Bay Police Service doesn’t detail whether this is a first or subsequent offence for the driver.  If the offence is a first offence, the total-payable fine would range between $1,250 and $6,250.  If the offence is a subsequent offence, then the minimum total-payable fine would begin at $2,500.  A conviction for driving on a suspended licence also results in a mandatory further 6 month suspension of driver’s licence on top of any pre-existing suspensions.

Depending upon the actual cause of the driver’s suspension of licence, HTA s.53(1.1) provides for even greater fines:

“(1.1) Despite subsection (1), every person who drives a motor vehicle or street car on a highway while his or her driver’s licence is suspended under section 41 or 42, even if it is under suspension at the same time for any other reason, is guilty of an offence and on conviction is liable,

Driving a motor vehicle without insurance falls under section 2(1)(a) of the Compulsory Automobile Insurance Act and carries the following penalty section:

Unfortunately for this young driver, they are now facing enormous penalties that will effect them for years to come…if not for the rest of their life.  While this case is certainly an extreme case of poor decisions leading to a multitude of very serious charges, the essence of the scenario is a very common one:  sometimes a poor decision can lead you into serious legal difficulties.  So what can be done?

Generally there will be two ways that a defendant can respond to their charges at court.  The first is to act as a self-represented defendant.  You are your own legal representative.  Doing so avoids spending money on legal representation.  However, if you are unfamiliar with the law and the legal process this can result in serious legal missteps, a weaker negotiating position, and a significantly poorer outcome.

The second approach would be to obtain a legal representative.  Someone who is trained and licensed by the Law Society to argue on your behalf at court.  While this will cost you money, it will generally provide you with a much stronger legal defence and a better outcome.  You invest a short-term cost at the start of your legal problems to guard and protect your long-term interests such as fines owing to the court, insurance costs (or whether you can be insured), protecting against suspension of driver’s licence or imprisonment, as well as any impact to your employment and personal life.

Either way that you decide to proceed, basing your decisions on solid information is important.  Most defendants are unaware of the penalties that they are facing and even police officers at roadside commonly make mistakes in trying to advise defendants on simple issues such as demerit points.