Transport Trucks and Following Too Closely in Ontario | There Is Hope! There Is Help! 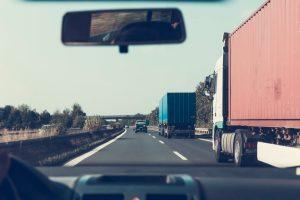 Transport trucks are an important part of Ontario’s economy.  The transportation industry is a major source of employment and is responsible for the delivery of critical materials in our modern ‘just-in-time’ manufacturing and supply economy.  Whether travelling on Highway 400 or 401, or along city streets, transport trucks are a large portion of Ontario’s roadway traffic.  But what happens when things go wrong?  What happens when a transport truck driver breaks the law or is involved in an accident?  What charges can be issued by the police and what are the consequences?  One such issue that has been in the news recently involved Following Too Closely and Stunt Driving charges.

Following another vehicle too closely is a safety issue.  If the following distance is too close to allow for a driver to react and stop their vehicle (given better or worse road conditions), a collision can occur.  This is incredibly important when comparing lighter cars that can stop quickly and heavy transport trucks potentially carrying liquid loads or dangerous goods.  Collisions result in damage to vehicles and property, injury, and even death.  A collision on a major highway could result in a road closure effecting hundreds of drivers.  Collisions can be incredibly costly to everyone involved and can negatively impact lives for years if not forever.

Regular vehicles and commercial motor vehicles (CMVs), such as transport trucks, are regulated under Ontario’s Highway Traffic section 158 for following distance as follows:

Under subsection (1), regular vehicles are provided a somewhat ambiguous requirement of not following more closely “than is reasonable and prudent having due regard for the speed of the vehicle and the traffic on and the conditions of the highway.”  However, subsection (2) specifies that commercial motor vehicles can not be within 60 meters of another vehicle when their rate of speed if greater than 60 km/h.

While the fine for Following Too Closely is relatively small (a $110.00 total-payable fine), the other penalties for doing so are actually quite large.  The driver of the vehicle would receive a significant 4 demerit point penalty against their driver’s licence and could also experience a significant increase to insurance costs.

More importantly however in the case of a commercial motor vehicle, the company would face the highest-possible CVOR penalty of 5 CVOR points.  This could have a significant impact on the employer, their insurance costs, as well as bring their company into conflict with the Ministry of Transportation.  This in turn could result in the driver’s employment being terminated and then having difficulty finding new employment in the transportation industry.

However, something very significant recently occurred in regards to transport trucks and following too closely as reported by Global News: 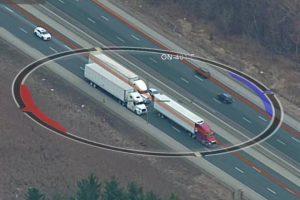 Using aerial enforcement, which could have been a drone, airplane, or helicopter, the OPP tracked a transport following within 10 meters of another transport truck.  That following distance is a sixth of the minimum required 60 meter following distance under Highway Traffic Act section 158(2).  However, rather than laying a charge of Following Too Closely, the OPP issued a charge of Stunt Driving under HTA section 172.

Stunt Driving offences are most commonly issued for driving 50 km/h or more over the posted speed limit.  However, the full definition of “race or contest” and “stunt” under Ontario Regulation 455/07 is actually quite complex:

This is certainly a very uncommon charge for the police to issue in this circumstance.  Perhaps there were details of the driver’s behaviour on the highway that were not disclosed by the police that were very dangerous or fit other definitions of Stunt Driving.  Another possibility is that with the busy summer months on Ontario’s highways approaching, the police wanted to make a very public and pointed statement to truck drivers.  Whatever the reasoning or legal cause, Stunt Driving charges are incredibly serious charges with massive penalties.

Before setting foot in a courtroom, this driver has had his driver’s licence suspended for 7 days and has had his tractor trailer towed and impounded.  The truck driver will now be out 7 days of work and income.  The employer will now be short an employee for that same period of time potentially impacting their customers that rely on their goods being delivered reliably and on time.  The cost of towing and impounding a tractor trailer would likely be somewhere in the thousands of dollars.  Who pays that?  The low-paid truck driver or the company?  All of the businesses that were awaiting their goods and materials on that truck will now be impacted, as well as the other businesses and customers reliant upon them, and so on.

All of this is even before the matter has been discussed before the court.

Keep in mind, that the court may find that the police issued a Stunt Driving offence improperly.  The court could also end up dismissing the offence at trial simply based on the objective legal merits of what happened.  Even if this truck driver is found to be innocent at court, irreparable harm has occurred to multiple parties due to the police issuing a charge of Stunt Driving rather than the common offence of Following Too Closely.

Even worse.  What if the driver simply pleads guilty or is convicted at court?  A regular Following Too Closely charge would carry a $110.00 total payable fine, 4 demerit points, and 5 CVOR points against the employer that could result in their termination of employment.  A conviction for Stunt Driving would carry 6 demerit points, 5 CVOR points, and could also result in the following court penalties being issued:

(2) Every person who contravenes subsection (1) is guilty of an offence and on conviction is liable to a fine of not less than $2,000 and not more than $10,000 or to imprisonment for a term of not more than six months, or to both, and in addition his or her driver’s licence may be suspended,

(a) on a first conviction under this section, for not more than two years; or

It is important to note, that the court fine is also subject to a 25% victim fine surcharge. This results in a total-payable court fine ranging between $2,500.00 and $12,500.00 on top of the cost of towing and impounding the tractor trailer and a week’s worth of lost income (if not being entirely terminated from employment).  The truck driver could receive up to six months of imprisonment and face up to 2 or 10 years suspension of their driver’s licence depending on their driving history.

A conviction for Stunt Driving would also generally result in no longer qualifying for regular insurance and being forced to seek out ‘high risk’ insurance.  This could mean prohibitively high insurance costs resulting in the driver not being able to afford insuring their personal vehicle.  This could also mean not being reasonably insurable for driving a commercial motor vehicle.  The consequences of a Stunt Driving conviction are staggering in this scenario.

This recent decision by the OPP to issue a charge of Stunt Driving rather than a simple offence of Following Too Closely is certainly cause for all parties involved to pause and consider what has happened.  Does the street-level police officer understand the legal definitions of Stunt Driving and the impact that issuing such a charge will have on multiple parties?  Do truck drivers and transportation companies now need to pause and take a very hard look at this issue?  Families could be financially devastated and transportation companies could be crippled or shut down.

What Can I Do if I’m Charged By The Police?

Whether you are a regular driver or a professional truck driver in Ontario, if you have been charged with Follow Too Closely or Stunt Driving you should immediately seek out help.  You are going to need to understand what you are charged with and what consequences a conviction will mean.  Hiring a licensed paralegal to represent you at court is generally the most cost-effective may to protect your interests and minimize the stress and anxiety that normally occurs in this situation.  Many of these cases can be entirely handled by a paralegal on your behalf without you ever needing to step foot in a court room or ever needing to file a court document.  Avoiding a poorly argued defence or legal missteps is critical.

If you've been charged with careless driving in Ontario you should contact us as soon as possible. We have skill and experience in helping drivers just like you respond to accusations of careless driving and provide free, confidential consultations to empower you to fight your charges. We help drivers throughout Ontario including Cambridge, Georgetown, London, Windsor and from our home office in Kitchener. Contact us online or call us directly at 1.844.647.6869 or text us a copy of your ticket to 226.240.2480.