Ontario’s Highway Traffic Act (HTA) was first introduced in 1923 to deal with an increasing number of accidents as automobiles became more common. With almost a century of time having passed, the HTA has seen multiple amendments to deal with the evolution of modern society and technology. This evolution has seen some very specific laws included to deal with very unique situations as well as resulted in some outdated laws lingering on the books that are rarely (if ever) used.

RIDE TWO ON A BICYCLE

A bicycle built for two may seem like a romantic idea.  However, according to Highway Traffic Act section 178(2):

So, unless your bicycle is specifically designed to carry more than one person, you may want to think twice before taking a passenger on your handlebars or on the seat behind you.  Doing so could result in a total-payable fine of $110.00.  That makes for an expensive bicycle ride!

Thinking that you might not have to worry about this if you’re driving a motor-assisted bicycle?  HTA section 178(3) has been added to cover just this exact same situation:

Undoubtedly we’ve all run across a movie scene where the hero grabs onto the back of a car or bus to speed away on their bicycle, skateboard, or hoverboard.  Perhaps you thought about doing this when you were a youngster…or maybe you even did it!  Setting aside the obvious safety issues inherent in this dangerous behaviour, HTA s.178(4) is another good reason to travel under your own power alone:

Doing so will result in a total-payable fine of $50.00.  That’s a lot of bus rides that could simply have been purchased.

DUTIES OF PEDESTRIANS WHEN WALKING ALONG A HIGHWAY

Thinking that the Highway Traffic Act applies only to bicycles and motorized vehicles?  Think again!  Pedestrians are also regulated in their use of Ontario’s roadways.  HTA section 179 is one such example:

If you are walking along a roadway that doesn’t have a sidewalk, you are required to walk as closely as possible to the left side of the road (facing oncoming traffic).  Failing to do so can result in a $50 total-payable fine!  There is however one legal caveat under HTA s.179(2) that does not require people walking a bicycle to cross the roadway to the left side if doing so would be unsafe:

Oddly, the first section dealing with regular pedestrians does not include the ‘if doing so would be safe’ clause. 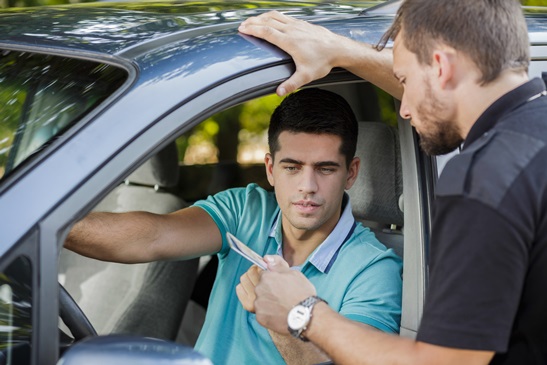 Pedestrians are also prohibited from soliciting a ride from anything other than a “public passenger conveyance” under HTA s.177(1):

We’ve all seen someone at the side of the road with a sign or their thumb out in the air to hitchhike.  Not only could it be incredibly dangerous to get into a stranger’s vehicle, but doing so could result in a $65.00 total-payable fine if you’re charged by the police.  That’s certainly more expensive than your average bus or taxi ride!

It’s not nice to litter.  No one wants to live in a world with garbage and refuse strewn about.  The Highway Traffic Act weighs in on this issue under section 180:

“180 Every person who throws or deposits or causes to be deposited any glass, nails, tacks or scraps of metal or any rubbish, refuse, waste or litter upon, along or adjacent to a highway, except in receptacles provided for the purpose, is guilty of the offence of littering the highway.  R.S.O. 1990, c. H.8, s. 180.”

This could be throwing your food wrapper out the window or perhaps a cigarette butt. Aside from polluting the environment, it could also land you a total-payable fine of $110.00 if you are spotted by the police.  One of the less common scenarios is a driver angry at having been stopped and charged by the police.  Upset that you got a ticket?  That’s ok, fight it at court!  Just don’t throw your ticket out the window, or the officer may issue you another charge for having littered the highway!

DEPOSIT OF SNOW ON THE HIGHWAY

Canada and snow.  Snow and Canada.  They go hand-in-hand come the wintertime.  No one would be surprised that the Highway Traffic Act would cover situations like drivers driving safely on snowy roads.  Sliding on a snowy road and causing a collision could readily result in a Careless Driving offence being issued.  But what about shovelling the snow on your driveway or sidewalk?  HTA s.181 weighs in on this issue:

“181 No person shall deposit snow or ice on a roadway without permission in writing so to do from the Ministry or the road authority responsible for the maintenance of the road.  R.S.O. 1990, c. H.8, s. 181.”

Where do you put your snow?  Certainly in high-density cities like Toronto, home or business owners with little-to-no yard space may be tempted to just shovel the snow onto the roadway.  However, you might want to think twice about doing so.  If charged by the police, you would be looking at a $110.00 total-payable fine!

The Highway Traffic Act predominantly covers the activity of motorized vehicles on Ontario’s roadways.  However, it also includes multiple sections dealing with the behaviour of pedestrians on roadways as well.  HTA section 177(2) deals with the following interesting situation:

“(2) No person, while on the roadway, shall stop, attempt to stop or approach a motor vehicle for the purpose of offering, selling or providing any commodity or service to the driver or any other person in the motor vehicle.  1999, c. 8, s. 7 (1).”

Whether a vehicle is stopped or you attempt to stop a vehicle, it is illegal to approach a vehicle to offer, sell, or provide a commodity or service.  This could certainly be issued against people approaching cars at intersections to clean (aka. ‘squeegee’) their windshields.  For the handful of spare change that could be received for cleaning a car window, the potential $65.00 total-payable fine could certainly make window cleaning at intersections an unprofitable business decision.

First, HTA section 176(4) doesn’t allow school crossing guards to use their stop sign under any other conditions other than those outlined in the previous section:

Using the school crossing stop sign in any other situation other than the one specifically defined by the HTA could result in being charged by the police and being faced with a total-payable fine of $110.00.

Feeling like you want to go out and help people across the road while using a school crossing stop sign?   Leave this one to the school crossing guards.  Doing otherwise can result in being charged by the police and being hit with a $110.00 total-payable fine.

Not only are school crossing guards and school crossing stop signs regulated under the Highway Traffic Act, so too are the more general traffic-control stop or slow signs under section 146.1(5):

Trying to direct traffic unless you meet the criteria of a person authorized to do so under HTA s.110.5 could result in being charged by the police and facing a $110.00 total-payable fine.

USE OF PASSING BEAM

Section 168 of the HTA is fairly commonsense, although it is certainly interesting to take a look at for its two subsections:

“168 When on a highway at any time when lighted lamps are required to be displayed on vehicles, the driver of a motor vehicle equipped with multiple beam headlamps shall use the lower or passing beam when,

(a) approaching an oncoming vehicle within 150 metres; or

Most people have experienced driving at night time only to be blinded by the high-beam headlights of another vehicle.  Common courtesy and sense tells us to lower those high-beam headlights when approaching a car from ahead or behind,  Fortunately, the HTA defines the obligations of drivers in these two situations.  If you are approaching traffic from the opposite direction, your high beams need to be lowered within 150 meters of meeting the other vehicle.  If you are approaching a vehicle from behind, then the high beams need to be lowered within 60 meters distance unless you are in the act of overtaking or passing.  Failing to do so can result in the police issuing a charge carrying 2 demerit points and a total-payable fine of $110.00 (or $150.00 if you’re in a community safety zone).

Canadian winters can come with heavy snowfalls that can cause all manner of problems for people trying to drive on our roadways.  Snow removal crews work to keep our roads clear of snow and safe to drive on.  Leaving your vehicle in a position that interferes with the work of snow removal crews can get you into trouble under HTA section 170(12):

Interfering with the work of snow removal workers can result in being charged by the police and facing a total-payable fine of $65.00.  While no one likes the prospect of a record of conviction or having to pay a fine, these charges come with another potential problem under HTA section 170(15):

“(15) A police officer, police cadet, municipal law enforcement officer or an officer appointed for carrying out the provisions of this Act, upon discovery of any vehicle parked or standing in contravention of subsection (12), of a regulation made under subsection 26 (3) of the Public Transportation and Highway Improvement Act or of a municipal by-law, may cause it to be moved or taken to and placed or stored in a suitable place and all costs and charges for the removal, care and storage of the vehicle, if any, are a lien upon the vehicle, which may be enforced in the manner provided by the Repair and Storage Liens Act.  2005, c. 26, Sched. A, s. 28 (2).”

If your vehicle is towed and stored, there are two immediate consequences.  The first is the inconvenience of not having your vehicle until you can locate it and have it released to you.  The second problem is that you may be facing several hundred dollars in towing and impounding fees.  That makes for a very expensive mistake for parking your vehicle in the wrong place at the wrong time!

IF YOU GET CHARGED

Often times our office is contacted by people that do not understand the penalties that they are facing or their available legal options in protecting themselves from court penalties, licence suspensions, imprisonment, or insurance problems.  It is also not uncommon for a defendant to be provided incorrect information by the Police Officer that issued the charge against them.