How Do I Fight a Follow Too Closely Charge in Ontario? 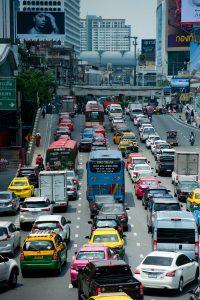 Follow Too Closely offences fall under Ontario’s Highway Traffic Act.  These offences can be issued by the police to regular drivers or commercial motor vehicle drivers such as transport truck drivers.  Simply paying the ticket means that you are pleading guilty to the offence without providing your defence at court and being subject to court, licensing, and insurance penalties.

What is a Follow Too Closely offence and what are the consequences of being convicted?  Should you fight the charge at court or just pay it?

What Is ‘Follow Too Closely’ According To The Law?

“Follow Too Closely” falls under section 158 of Ontario’s Highway Traffic Act.  Subsection (1) deals with regular vehicles such as drivers with a regular G licence in their personal vehicle:

Subsection (2) deals with commercial motor vehicles (CMVs) such as a driver with an AZ licence in a transport truck:

The first section, for regular drivers, is fairly ambiguous and open to interpretation.  The wording of HTA s.158(1) simply requires that the driver not follow the next vehicle closer than is ‘reasonable’ and ‘prudent’ taking into consideration vehicle speed, traffic, and road conditions.  There are no specific following distances by rate of speed or any guidelines on how traffic or road conditions should impact specifically how far behind the next vehicle you should be travelling.

Commercial motor vehicles however get a very specific guideline.  These vehicles must follow no closer than 60 meters when travelling greater than 60 km/h.  60 meters is roughly the length of three transport trucks (include both cab and trailer).  This would include smaller highways where the speed limit is 80 km/h or larger highways like the 400, 401, or 403 where the speed limit is 100 km/h.  HTA s.158(2) however does not speak to following distances for CMV drivers when their speed is 60 km/h or less.

How Can The Police Charge Me With Follow Too Closely?

There are two general scenarios under which Ontario drivers will find themselves charged with Follow Too Closely by the police:

If you have been in a collision where you have rear-ended the vehicle ahead of you, you may be issued a Follow Too Closely offence.  This could be due to wet or icy roads and having not left enough following distance given the poor road conditions.  Or it could be due to having not left enough following distance to allow your vehicle to safely stop should the traffic ahead unexpectedly slow or come to a complete stop.

Scenarios where a driver is charged with Following Too Closely where no collision occurred are most common for commercial motor vehicles on highways.  In Ontario, the police have used police cars, drones, airplanes, and helicopters to observe transport trucks on the highways and how closely they are following other traffic.  A driver may have no idea that they are being observed by the police until it is too late and they are stopped by a officer who issues a charge .

There are two ways that you can be charged with Follow Too Closely:

If you are charged with a ticket, your case will be argued at court by a Municipal Prosecutor.  Generally these are simpler cases and take less court appearances to resolve.  A ticket will generally list your fine on the lower section of the offence notice:

The fine is composed of a set fine, a $5.00 court cost, and a victim fine surcharge.  Charges that occur in a community safety zone, such as a school zone, have a higher fine than offences that occur in less safety-sensitive locations.

A summons is generally issued in more serious cases.  These cases are argued at court by a Provincial Crown Prosecutor and will generally be much more involved.  A summons does not list a specific court fine as the fine is determined by the court if you are convicted.  As HTA section 158 does not list a specific range of fine, the range of fine defaults to the general penalty for Provincial Offences:

It is important to note that this fine is also subject to the victim fine surcharge which could lead to a maximum total-payable fine of $6,250.00.

How Many Demerit Points Do I Get For Follow Too Closely?

Whether charged as a regular driver or a commercial motor vehicle driver, by way of a ticket or a summons, or whether or not the offence occurred in a community safety zone, Follow Too Closely results in a 4 demerit point penalty upon convictions

How Many CVOR Points Do I Get For Follow Too Closely?

Commercial Motor vehicle drivers can receive 5 CVOR points for a Follow Too Closely conviction.  5 CVOR points is the maximum CVOR point penalty for a conviction under the Highway Traffic Act.  Being convicted could result in termination of employment and difficulty in obtaining new employment.

What If I’m A Novice Driver?

What Can I Do If I’m Charged With Follow Too Closely?

The first important thing to do is to seek out the information that you will need to know to make informed legal decisions.  A hasty or uninformed decision can result in an else wise avoidable conviction and having to face unnecessary penalties for years to come.  Our friendly team at OTD Ticket Defenders Legal Services can assist you with the basic information you need to help ensure that you know your options and are making informed decisions.

While the court process may seem confusing and intimidating, our experienced and knowledgeable paralegals can resolve most court cases without ever needing you to file a court document or appear in a court room.  Our team is here to help you.  Put their expertise in the courtroom on your behalf to fight for your rights and the best possible outcome at court.