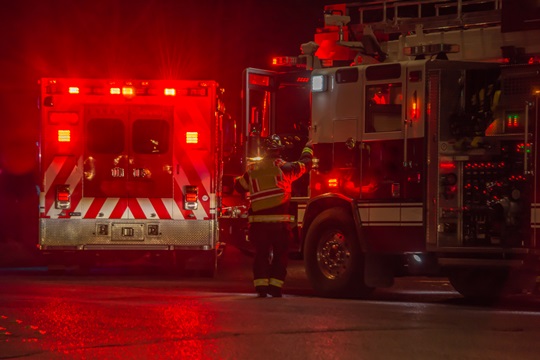 Ambulances, fire trucks, police cars, tow trucks, and public utility vehicles are given special privileges under Ontario law. Drivers must yield to these vehicles when they are being used to respond to an emergency situation. Failure to do so is considered a major offence and thus carries substantial penalties.

What the Law Says About Sharing the Road With Emergency Vehicles

Moving over for emergency vehicles is discussed in Section 159(2,3) of the Ontario Highway Traffic Act. The law states:

The key point to remember here is that the move-over law requires you to move over if you are able to do so. If you can’t, you need to slow down.

The Official Ministry of Transportation (MTO) Driver’s Handbook points out that drivers must remember that emergency vehicles come in many forms. It states, “Emergency vehicles—police, fire, ambulance, and special public-utility vehicles—are easily identified through their use of flashing red or blue lights, a siren or bell, or alternating flashes of white light from their headlamp high beams. Also, be aware that police, fire, and ambulance services use many different types of vehicles, such as bicycles, snowmobiles, all-terrain vehicles, motorcycles, buses, and trucks.”

Because of the important role emergency vehicles play in protecting public safety, there are stiff penalties for this offence.

If this is the first time you’ve been ticketed, the penalties include:

If it is a second or subsequent offence within a five-year period:

Even though this charge only carries the threat of a licence suspension if it is your second or subsequent offence, you may still lose your driving privileges if you’ve been previously ticketed for other types of traffic violations. Demerit points are accumulated for all offences in Ontario, as well as those in other Canadian provinces and territories, the State of Michigan, and the State of New York. If you have a full licence, your licence will be suspended if you accumulate 15 or more points.  If you have a G1, G2, M1, M2, M1-L, or M2-L licence, your licence will be suspended if you accumulate nine or more points. Points stay on your driving record for two years.

Gong beyond the fine and initial demerit points, violating the move-over law can lead to substantially higher insurance premiums. If your insurance company labels you a high-risk driver, you may face double-digit rate increases for the three years that the offence will remain on your driving record.

Because a ticket for failing to yield for an emergency vehicle can carry such harsh penalties, you should not plead guilty and accept the consequences without a fight. There are several defences that might be applicable in your case, such as arguing that the vehicle was not clearly identifiable as an emergency vehicle or that the required action would have been unsafe under the circumstances.

The experienced paralegals at OTD Ticket Defenders Legal Services Professional Corporation can help you evaluate your options and determine the best way to proceed. When you are represented by a member of our team, you will typically not need to make a court appearance unless you wish to do so. After the initial consultation, we will be able to handle all matters on your behalf.