It’s a beautiful sunny day. The car stereo is playing your favourite song. You glance up into the rearview mirror and then back to the road ahead only to notice an unexpected stop sign that you don’t have time to stop for. Do you have time to slam on the breaks and possibly stop partway through the intersection? Do you slow as much as safely possible and go through the intersection without stopping?  Minutes later, you find yourself stopped by a Police Officer and receiving a ticket for Disobey Stop Sign – Fail To Stop. 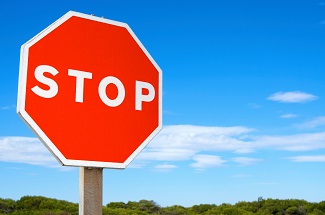 What does the ticket mean?  What are the penalties involved?  What can you do to fight the ticket?

A stop-sign-related offence may be issued under various wordings:

The three successive criteria are to first stop at the stop bar painted on the roadway, or if there is no marked stop bar, to stop immediately before entering the nearest crosswalk. If there is no crosswalk, you should stop immediately before entering the intersection. These three criteria can be contravened by either not stopping before the appropriate place (stopping beyond them) or by not stopping at all.

Usually, the big concerns with most offences will be fine, demerit points, CVOR points, and insurance repercussions.

Fines are comprised of two parts. The first is the ‘set fine’ portion, and the second is court costs and a victim fine surcharge. A basic stop-sign-related offence will carry a set fine of $85.00 with a total payable fine of $110.00. If the offence has occurred in a community safety zone, the fine will be higher.

Demerit point penalties for an offence under the Highway Traffic Act (HTA) can range from 0 to 7 demerit points. A conviction for an offence under HTA section 136(1)(a) carries a three demerit point penalty. As you accrue demerit points, the MTO can issue a warning letter, require you to attend a mandatory meeting with an MTO officer, or suspend your licence. If the offence occurred in a commercial motor vehicle, such as a transport truck, you might also be facing a 3-CVOR point penalty. Demerit point penalties are active for two years from the original offence date, although the actual offence remains visible for third parties such as an employer or insurance company for a total of three years. The Court will generally be aware of all prior convictions, although generally, only the last five years should be considered recent and relevant.

As far as the specific impact an offence will have on your ability to remain insurable, or the cost of your insurance, the most reliable source of information will be your insurance broker.

What Can Be Done If You Are Charged With Failure To Obey A Stop Sign?

By pleading guilty or pleading guilty with an explanation, you will be convicted of the offence, be assigned your fine and days to pay the fine, and the Court will generally update the MTO within 24-48 hours.

Alternately, you can choose to fight the offence at Court. The specific court process varies from jurisdiction to jurisdiction, although there is a general overall process that occurs. The first step is to have the matter filed with the Court. Some courts set right to trial, others to first attendance dates, and others to an early resolution meeting between the defence and prosecution.

Regardless of the particular process of the given Court, it is generally prudent for the defence and prosecution to sit down to review and discuss the evidence involved in the matter before stepping into the courtroom to run the trial. If there is a clear argument that the charge does not apply, that there are fatal errors in the Prosecutor’s evidence, or that the Court would reasonably rule in the defendant’s favour at trial, there may be an agreement to simply have the charge withdrawn on the next court date.

If no agreement can be reached to have the charge withdrawn, then a decision must be made whether to proceed to trial or to attempt to negotiate to a lesser offence to mitigate the various pending penalties. A licensed and experienced paralegal can help you navigate this decision by evaluating the evidence of the Prosecutor versus your available defences at trial.

Negotiating an acceptable resolution to a lesser offence provides a guaranteed resolution if it is accepted. Alternately, if an acceptable resolution cannot be reached, then a trial will provide you with the opportunity to have your defence argued at trial. Depending on the nature of your matter, you may or may not be asked to be present at trial. At the conclusion of the trial, the Justice of the Peace will weigh the various arguments and testimony in determining whether to convict or dismiss the offence.

A ticket for Disobey Stop Sign carries financial, demerit point, record of conviction, and potential insurance rate penalties. Commercial motor vehicle drivers are also subject to a CVOR point penalty. The consequences of a conviction can last for years and can even have an impact on employability in industries where a clean driving record must be maintained.

Once a ticket has been issued, you will need to decide whether to contest the offence at Court or simply plead guilty and accept the consequences. A licensed and experienced paralegal will handle the court filings and court appearances on your behalf, with many cases never requiring the defendant to step foot in a courtroom. A licensed paralegal will ensure that your court filings are done correctly and that your defence is presented accurately, avoiding many of the common legal missteps made by self-represented defendants at Court.

Have You Been Charged With Failing To Obey A Stop Sign In Ontario?

If you've been charged with failing to obey a stop sign in Ontario you should contact us as soon as possible. We have skill and experience in helping drivers just like you who have been accused of failing to obey a stop sign and provide free, confidential consultations to empower you to fight your charges. We help drivers throughout Ontario including Cambridge, Georgetown, London, Windsor and from our home office in Kitchener. Contact us online or call us directly at 1.844.647.6869 or text us a copy of your ticket to 226.240.2480.

You Have The Right To Fight The Charge

If You Have A Clean Driving Record And Get A Traffic Ticket, It Is Best For You To Speak With Us About Your Options!